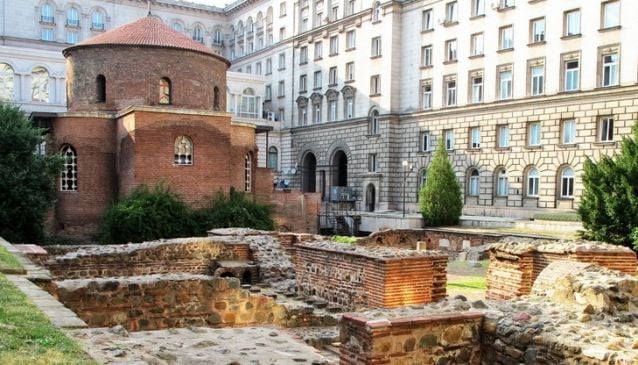 St George (Sveti Georgi) Rotunda Church is the oldest architectural monument in Sofia and undoubtedly one of the most interesting. Some studies refer to it as the living illustration of the history of the Bulgarian Capital as it has survived ages of natural and human interceptions and is still standing sound and solid in the center of the city.

It is believed that the building was constructed during the 4th century by the Romans and served as a martyrion (temple of a saint martyr). This was the time when Serdika (nowadays Sofia) was one of the largest and busiest Roman towns on the Balkan Peninsula. The Roman Emperor Constantine the Great who ruled then is believed to have said 'Serdica - that is my Rome.'

Later, with the mass conversion to Christianity, the martyrion was transformed into a baptistery - this is when the first painting dates back to. In the beginning of the 6th century the baptistery became a church and was given the name of St Great Martyr Georgi. 10 centuries later, when the Turks occupied Bulgaria, it was transformed into a mosque, the wall paintings were covered with white plaster with floral elements and a minaret was built. It was only recently (less than a century ago) that the temple was reconstructed, the minaret was removed, the paintings (5 layers of them) were uncovered and divine service was resumed.

St George Rotunda Church is nowadays a well-preserved example of the ancient construction and fine Christian art. It comprises of a rotunda (central part) which together with the smaller vestibules and niches takes the shape of a cross. The rotunda is a cylindrical domed construction built on tall posts that form a special ventilation system. The building is pierced by vaulted entrances and cylindrical windows. It radiates stoutness and simplicity.

There are 5 layers of wall paintings discovered in St George Rotunda Church. 3 of these are from the Middle Ages (10th - 16th c.) and are best preserved (in terms of size and quality) and sufficient to conduct a study. They illustrate the grandeur of the East Christian pictorial art of the time. The 2 earlier layers have inscriptions in Greek and the latest 3rd layer - in Old Bulgarian language.

St George Rotunda Church is attended daily by hundreds of tourists and believers. The temple has a top central location close to almost all tourist attractions as well as hotels, restaurants and government institutions, stands about half an hour walk from the Central Railway and Coach Stations and is therefore a must see if you are visiting Sofia.

Daily worship services are performed each day in the temple as follows:

DIVINE LITURGY: After the Matins. Begins around 9:00 AM.