Tell us what you're looking for...

A Piece of Heaven in Balchik

Balchik offers far more attractions than just lying on the beach and gazing into the sea..

“What would I do for a whole day in a small town on the Black Seacoast?” That was the first thing that came to my mind when I decided to go to Balchik – one of the most popular resorts along the northern Black Seacoast in Bulgaria. It turned out, however, that Balchik offers far more attractions than just lying on the beach and gazing into the sea. Balchik is only 40 kilometres away from Varna– the biggest Bulgarian city along the coast - so getting there is easy. I decided to travel by car and it was certainly an incredible experience. I had heard the resort was located in an area of outstanding natural beauty, but I was not ready for what I encountered. Deciduous forests following yellow meadows and every now and then, just as a reminder of itself, tiny pieces of the eternal blue sea. I knew I was entering Balchik because of the small white marble buildings and the streets overflowing with people. Although it was just the beginning of the season in May, Balchik had already attracted tourists from the neighbouring towns, and the locals were preparing hastily for the start of the high season in June.

My first stop was the yacht marina in Balchik. As for myself, I am one of those people who cannot start their day without a decent dose of coffee and a breakfast for champions. I decided the yacht marina was the ideal setting to satisfy my needs. It is small in size but there are an attractive number of cafes and other small shops along the streets, so one can have an early morning coffee, while enjoying one of the most beautiful sights in Balchik. The landscape resembles a painting – small yachts docking at the marina in the early morning, fishermen sitting on the jetty with their rods already cast, and the first rays of sunshine touching the calm sea, which changes in colour every second from cobalt blue to turquoise, to a unique shade of green and azure. And if you happen to be the type of person that needs to check the latest news to start their day, it's not a problem asalmost every bistro and café at the marina is equipped with free wireless connection. 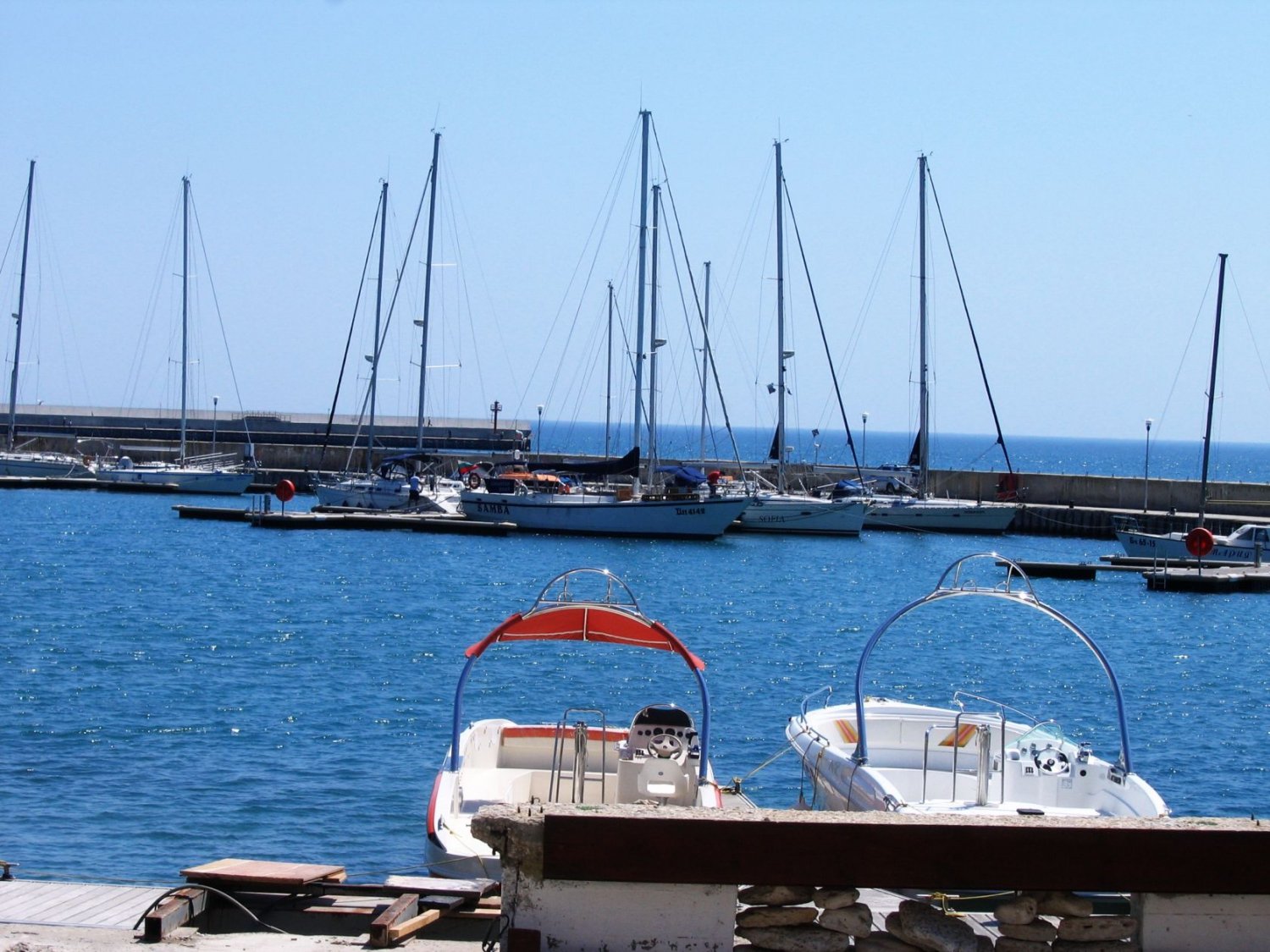 As hard as it is to take my eyes off the amazing view, I decide it was time to turn my attentions to my first stop in the cultural rounds agenda – the museums of Balchik. For a small town Balchik hosts very interesting museums. The town is the home of one of the oldest HistoryMuseumsin the country, as well as the EthnographicMuseum, which stores traditional Bulgarian attire and works of crafts. My trip started at the HistoryMuseum, which is nearby the waterside. There is a unique collection of artefacts dating back to the 6th century BC, all the way to1940when Balchik was finally freed from the Romanian occupation.

Once I finished my tour of the HistoryMuseum(which took almost an hour) I strolled to the EthnographicMuseum. It is a real advantage that the two are almost next to each other, so one can easily walk there. I immediately recognised the EthnographicMuseum– a small white house in a typical Bulgarian renaissance style with one of the most fragrant gardens I had ever seen. The scent of wild geranium, tulips, daffodils and lilacs was so sensually delightful I just wanted to sit in the garden and spend the whole day there.

But the exhibits in the EthnographicMuseumattracted my attention and I decided to continue with my original plan. Folklore clothes covered with beads, tools once used by the craftsmen, and manually woven rugs in the typical Bulgarian style of the time, are just some of the items exhibited in the EthnographicMuseumin Balchik. It is not surprsing that this museum is considered one of the most authentic in Bulgaria. A good thing about the museums in Balchik is that their opening times are from 08:30 amuntil 05.30 pmin summer and they’re only closed on a Sunday. In winter, however, they are only open until 02:30 pm.

10:00 am– a visit to the Renaissance Complex

The Renaissance Complex in Balchik is in the suburban estate of Horizont. The complex itself represents an undersized building in the patio of the Orthodox Church Saint Nikolay. This territory has shaped up as a complex because the building next to the church keeps historical artefacts from the enlightenment during the Renaissance period. The building is not the most impressive in terms of architecture, but the place seems charged with energy. I don't know whether it was because I entered in the middle of the service or because the bells of Saint Nikolay sounded like angels singing all over Balchik, but for a split second I felt as though I was in heaven. The garden in the churchyard and the century-old trees at the entry of the complex definitely contribute to this magical and spiritual atmosphere. 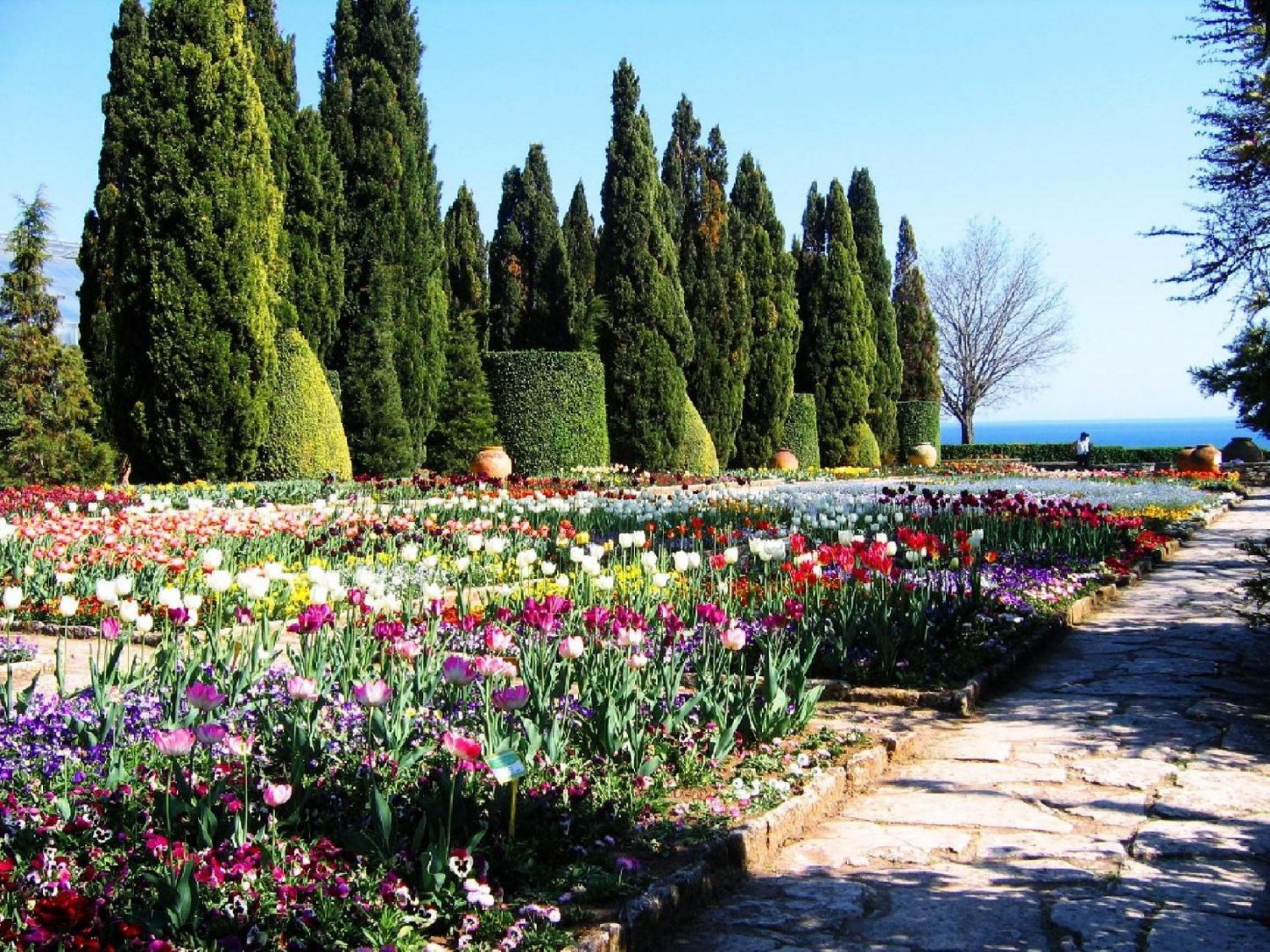 As I finished my tour around the museums and the Renaissance Complex I decided to go to the ArtGalleryin downtown Balchik. It opened in the 1930's and still is one of the finest cultural attractions of Balchik. A selection of renowned pieces by famous Bulgarian painters is exhibited there. The best known is Vladimir Dimitrov – the Master. Of course, most of the paintings depict the stunning surroundings of the sea, but I was personally most impressed by several still-lives.

I had a busy cultural programme in the morning, so I decided it was time to regain my strength with a delicious lunch. This time, for the fun of it, I decided not to go to the yacht marina, but to sit in one of the myriad of restaurants and bistros in the main street of Balchik. The main street is located in the downtown area and it is only accessible for pedestrians. However, don't worry, there are many car parks nearby, so you can leave your car there, if you've got one. There are plenty of souvenir shops, craftsmen workshops, taverns in the typical Bulgarian national style, as well as fast food restaurants.

I chose one of the numerous typical Bulgarian style restaurants right across the street from a small souvenir shop, where they were making sand drawings. This kind of art is very popular in Balchik. The sand is in various forms and has different colours. It is then processed and coloured additionally, and laid on hard cardboard foundation. Unique pieces of art are created using different tools. Almost every small shop in the main street of Balchik presents some sort of a craft – from richly decorated wooden spoons to beautiful crochet-hook table-cloths or unique paintings of the sea. It is a real pleasure to walk around the main street or just sit and observe the hard work of these unique talents.

After my third cup of ice tea and with my strength regained I advanced to the most famous sight in Balchik – the Botanic Garden. It is located in the periphery of the town and spans on 194 decars. The Botanic Garden is managed by the oldest university in Bulgaria– Sofia University Saint Kliment Ohridski whereunique plants are grown. The entrance fee for the Botanic Garden is approximately 5 Euros and the opening times are from 08:00amuntil 08:00 pm, seven days a week. The entrance gate is composed of marble and the one-of-its-kind combination of plants and their fragrances are breathtaking.

The Botanic Garden is one of the few spots in Bulgaria, where just one walk around makes you feel as if you've visited several countries. The endless beds of black, white, yellow, pink and variegated tulips made me feel as if I were in the Netherlands, the mixed tempting fragrance of daffodils, China Asters and violets reminded me of the beauty of Southern France, and the unique collection of large cactuses and succulents made me wonder whether I had miraculously crossed the ocean and landed in Texas. And although most of these plants reminded me of different countries, they felt as if they belonged right here 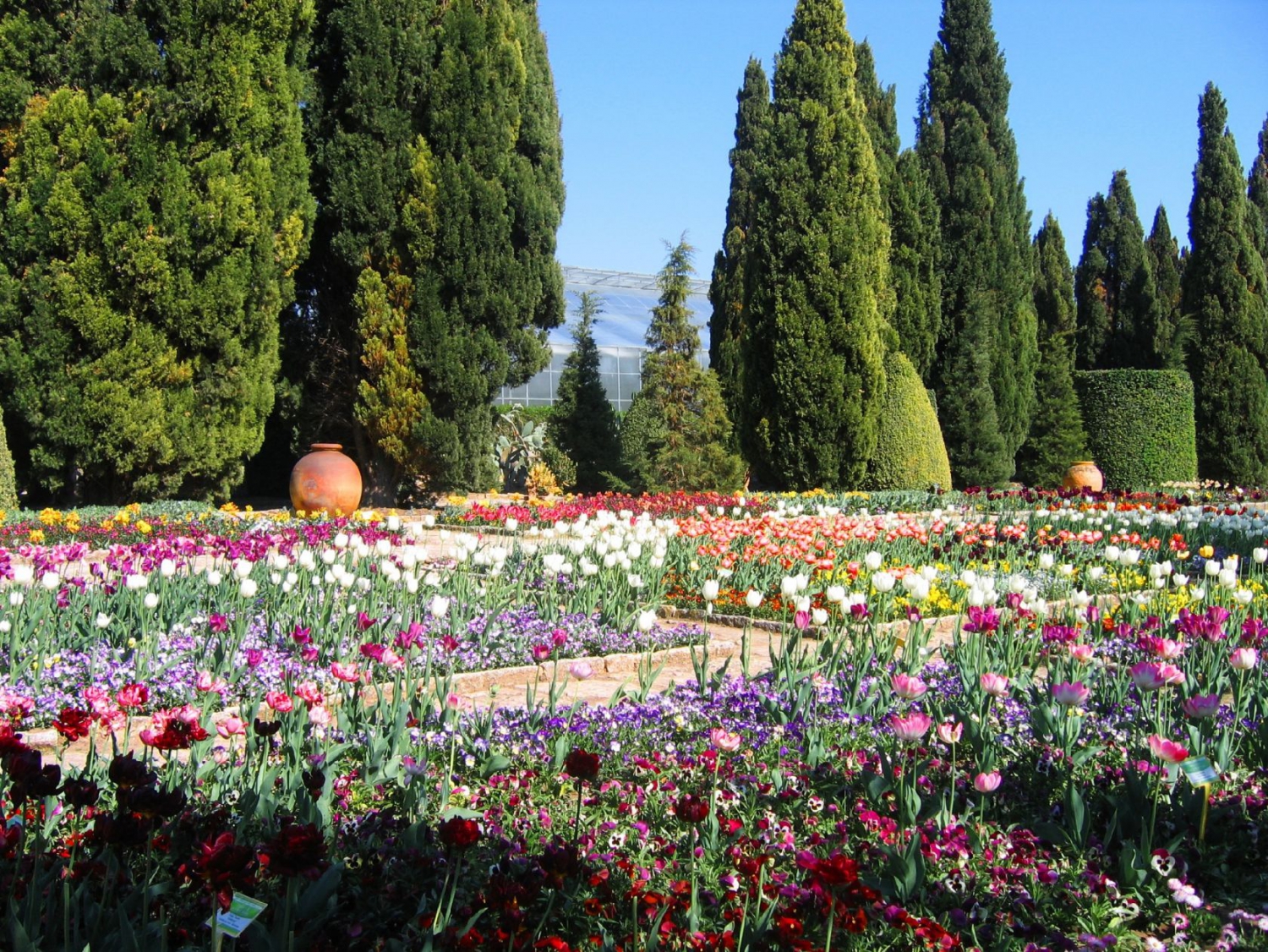 15:30 pm– arrival in the Castle of the Romanian queen Maria

The Botanic Garden flows naturally around the Architectural Complex of The Castle, which used to be the summer residence of the Romanian queen Maria in the 20th century. The ticket to the Botanic Garden gives you access to the Castle as well, so I decided to have a look at the place where the Romanian queen spent her holidays. The Castle was built in 1924 and was designed by the Italian architects Amerigo and Augustino. Perhaps this is why it radiates with Italian grandeur and magnetism. The place made me feel like a member of royalty. The castle itself is very attractive with its immaculate architecture and it was no surprise to learn that this was Queen Maria's favourite holiday destination. Walking around I enjoyed the beautiful views of the sea that emerged along almost all of the paths in the Botanic Garden and the Castle.

16:30 pm  -coffee in the cafes outside the Botanic Garden

After the walk around the Botanic Garden and the amazing flavour of the life of royal heirs in the Castle I went out in the long street just outside the Botanic Garden. This is a pedestrian area scattered with small cafes and bistros. The perfect spot to take a break and have a cup of coffee and taste honey, fresh from the beehives. Balchik is believed to be one of the richest natural honey regions in Bulgaria. Most of the people living here are apiculturists. You definitely must try the local honey during your first visit to Balchik.

I started on my way back to the yacht marina, a bit tired, but full of emotions. Balchik turned out to be a wonderful place to spend the day. And if you decide to stay the night there, I highly recommend the yacht marina again. The restaurants along the coast become alive at dusk. The air is full of the tempting smell of freshly cooked fish and the sun kisses the tranquil sea with its last rays. While you eat and taste a glass of Bulgarian wine (which is a must when you visit Bulgaria) in the distance you will see the glimmering lights of the last motor boats returning from the sea. Once you've visited this charming town you will always have a reason to come back again and again. 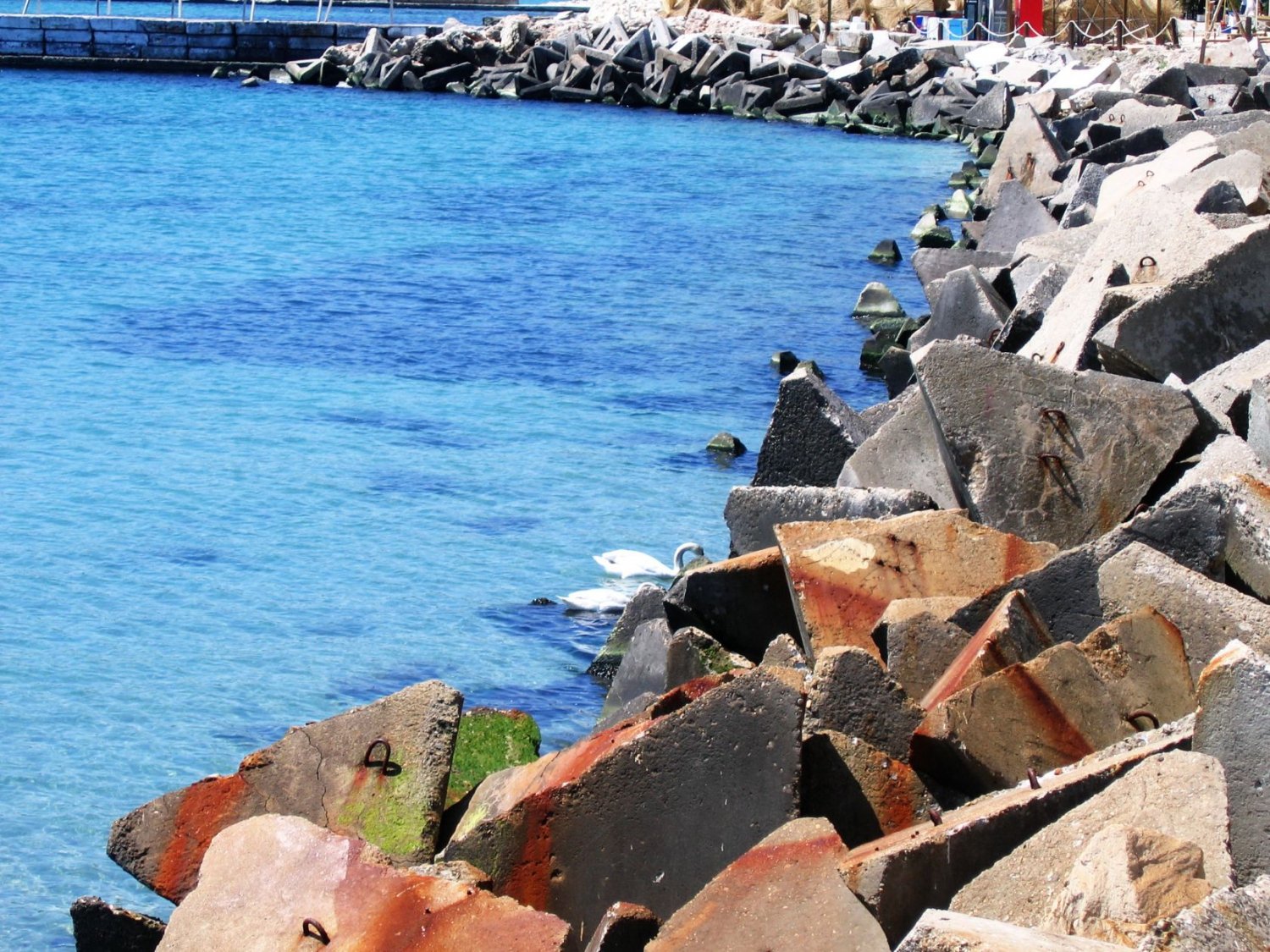