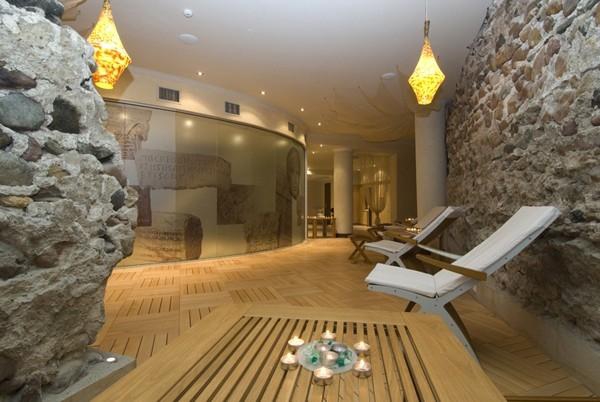 There are hundreds and thousands of luxury hotels all around the world but only few of them can compete with the originality, architectural ingenuity and aesthetic appeal of the five-star Arena di Serdica Residence Hotel, one of the newest recruits in the FPI Hotels and Resorts team. And this has everything to do with its location, of course... and a little bit of history.

People can find Arena di Serdica standing elegantly on the quiet Budapeshta Street in the centre of Sofia. The whole area where the hotel is situated actually reminds us in a way of the hill of Montmartre in Paris, with its beautiful steep, narrow walkways and alleys. There are lots of popular landmarks in the vicinity as well, including the Royal Palace, which is right next to the hotel, St. Alexander Nevsky Cathedral and the Russian Church among others. The offices and headquarters of many large companies and important government institutions also lie nearby - a fact that makes many businessmen and famous politicians choose Arena di Serdica when they are on a visit to Bulgaria. OK, wait a second! Is that why this place is so special? Well, no. Here is why.

As far as we know Arena di Serdica is the only hotel on the Planet Earth built on the ruins of a 3rd-century AD Roman amphitheatre that just happens to be one of the most astounding archaeological discoveries ever made and apparently merely a few metres smaller than the majestic Colosseum in Rome. And that is something special, isn't it? But what is even more impressive is the way in which the architects and experts managed to incorporate this historical gem into the impeccable design of the hotel. They did a fine job, indeed, and the recognition followed shortly. In April 2013 Arena di Serdica won a Prix d'Excellence Award in the prestigious international FIABCI Bulgaria Prix D'Excellence Awards for architecture. Magnum opus, so to say.

The basement of Arena di Serdica Hotel has a special lighting system and is set as a museum in which visitors can freely check out the restored section of the Amphitheatre of Serdica (Sofia's Latin name). Maybe that's the reason why the lobby bar feels like a mysterious portal to the past where you will not only learn a lot about Roman culture but also taste the simple joys of modern-day life, such as a cup of latte, for instance, or a glass of freshly squeezed orange juice. The state-of-the-art wellness club of the hotel is quite the same. There people can explore fabulous artefacts and interesting ancient constructions while relaxing in the spa centre or doing some exercising in the ultramodern gym. Mens sana in corpore sano, as they say.

The lobby is full of natural light and decorated in a subtle stylish manner, and so are the rooms and suites of the hotel. They are spacious, cosy, well furnished and basically have everything you need. And if there is still something else you want to get, don't hesitate and call room service. The hotel personnel are super professional, extra discreet and are at your disposal 24/7.

The keen admirers of the culinary art should not miss out on the exquisite meals served at the hotel's restaurants. La Tribuna Bistro has a pleasant Mediterranean feel to it and offers a nice variety of mouthwatering international dishes and desserts and a great selection of fine wines. When the clouds go away and the weather gets warm, its neat garden becomes one of the best places for business meetings or quiet romantic dinners in the whole city. La Terrazza di Serdica Restaurant, perched on the top floor of the hotel, provides guests with some stunning views of Vitosha Mountain and Sofia's skyline. It is only reserved for special occasions and events.

Last but not least, Arena di Serdica Residence Hotel flaunts several conference rooms and fully equipped halls that are suitable for a wide range of meetings, happenings, symposiums, seminars, corporate events, etc. Naturally, the hotel hosts and organises many private parties such as weddings and birthdays, too. Now, if you really want to have a celebration so unique that you will never forget, we suggest you ask the team of professionals working at the hotel to arrange it for you. Believe us, this is the only way to get to party inside an ancient Roman monument of culture.